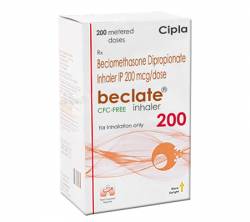 Beclate Inhaler contains Beclomethasone an active ingredient and a synthetic glucocorticoid. It is naturally produced by adrenal glands which is an anti-inflammatory agent. Its ability to target uniquely lungs when used as inhaler makes it a very good medication when prescribed for asthmatic patients.

Beclate Inhaler is used by puffing it through the mouth down to the lungs therefore reaching the desired part to be treated. Beclomethasone's ability to reach the targeted area minimizes the side effects normally associated with oral drugs intake. It is a well tolerated medicine and controls asthma to the lowest level it does not affect the growth in children when administered and allow free flow of air in the respiratory tract.

Its main active ingredient is known as Beclomethasone. It has a strong chemical attraction to cytoplasm receptors and prevents the increasing formation of chemical enhancers that are liable to lungs inflammation. Beclomethasone focuses mainly on the factors responsible for inflammation by suppressing them in the process thus preventing their further accumulation that could eventually result to asthmatic condition.