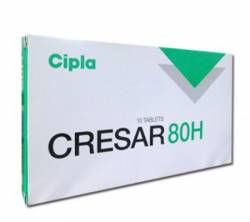 Cresar H is a fixed-dose combination of Telmisartan, an orally active angiotensin II antagonist acting on the AT1 receptor subtype, and hydrochlorothiazide, a diuretic. This combination provides synergistic reduction in blood pressure in hypertension patients.

In normal volunteers, a dose of telmisartan 80 mg inhibited the pressor response to an intravenous infusion of angiotensin II by about 90% at peak plasma concentrations, with approximately 40% inhibition persisting for 24 hours.

Hydrochlorothiazide is a thiazide diuretic. Thiazides affect the renal tubular mechanisms of electrolyte reabsorption, directly increasing excretion of sodium salt and chloride in approximately equivalent amounts. Indirectly, the diuretic action of hydrochlorothiazide reduces plasma volume, with consequent increases PRA, increases in aldosterone secretion, increases in urinary potassium loss, and decreases in serum potassium. The renin-aldosterone link is mediated by angiotensin II, so co-administration of an angiotensin II receptor antagonist tends to reverse the potassium loss associated with these diuretics. The mechanism of the antihypertensive effect of thiazides is not fully understood.

After oral administration of Cresar H, diuresis begins within 2 hours, peaks in about 4 hours and lasts about 6 to 12 hours.

The common side effects of Cresar H: diarrhea, headache, vomiting, nausea, chest congestion, fatigue, body and muscle aches. These side effects are minor and usually disappear within a week or two. If they continue for a prolonged period, consult your doctor.

The major side effects include dizziness, nausea, swelling of the hands, ankles, or feet and sudden weight gain. If you have an allergy to this medicine, you will experience symptoms such as swelling of the tongue, throat or face, rashes, itchiness and difficulty breathing.