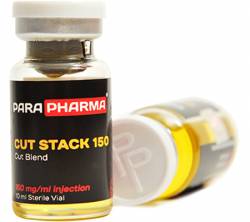 CUT STACK is a pre-contest stack. Testosterone Propionate - one of the injectable testosterone esters and is a fast acting testosterone which possesses all the major benefits of the longer acting testosterones, but with significantly less water retention. It also clears the body relatively quickly (levels peaking after 24-36 hrs with a 3 day active life) making it the testosterone of choice for drug-tested athletes.

CUT STACK also contains 50 mg Drostanolone Propionate. Drostanolone Propionate is a steroid with moderate anabolic properties. This steroid is most often used by bodybuilders who are preparing for a show due to the fact that the androgenic nature of it will give a hard, defined look to the muscles. Users of Drostanolone Propionate often report increases in strength and muscular stamina. It is also used by athletes in speed related and weight regulated sports, where it is a favorite due to its ability to produce good gains in lean muscle mass and strength with some reduction in body fat and minimal side effects. Drostanolone Propionate cannot convert to estrogen, meaning that estrogenic side effects such as water bloat and gynecomastia shouldn’t be a concern when running this steroid.  It also produces a noticeable increase in muscle density and hardness – attributes necessary come contest time.

The final ingredient in CUT STACK is Trenbolone Acetate. Users of Trenbolone Acetate often report amazing gains in both strength and quality muscle mass, while the fat and water seems to "melt" off. This steroid is also a powerful fat burning aid, and lots of bodybuilders actually claim that the body will still drop bodyfat very quickly, even when one's diet isn't very clean. It is important to note that Trenbolone Acetate will shut one's natural testosterone production down very quickly, thus making a proper PCT protocol a must upon conclusion of a cycle. Many athletes who use testosterone only cycles fail to maximize their muscle growth due to the imbalance between androgens and anabolic substances. When highly androgenic, moderate/low anabolic substances are used exclusively there is a tendency to develop tendon and ligament damage due to reduced collagen synthesis.