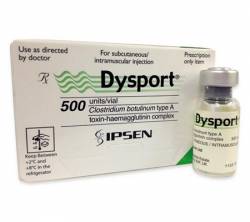 Dysport was created as a Botox alternative, however, Dysport includes Botulinium Toxin Type A. Dysport uses its Neurotoxin active ingredient derived from bacteria to inhibit the release of an important chemical in the nervous system. The effects are that corresponding muscles don't receive the chemical messenger which will usually make muscles begin to contract and spasm.

Dysport creates a comfortable atmosphere for the consumer during the procedure because it stimulates the muscles into temporary paralysis, giving the area a clean injection of enhancers for a more natural look. The wrinkles and fine lines disappear from the skins surface accordingly! In recent studies, Dysport has also been used to successfully alleviate symptoms of back pain, spasms, as well as overactive bladders. Just as its alternative, this product can also be used to eliminate the physical appearance of overactive sweat glands.

Dysport has been known to stimulate certain side effects in certain patients. Results and severity may vary by user, but it is common to experience minor side effects such as dizziness, rashes or slight nausea.