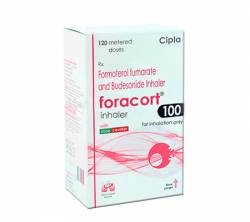 Foracort is a combination medication containing the active ingredients Budesonide and Formoterol. The inhaler contains a corticosteroid to prevent substances causing inflammation to be released and a bronchodilator to help relax the muscles in the air passages and enable easier breathing. Foracort is mainly prescribed to prevent asthma attacks and in the maintenance of chronic obstructive pulmonary diseases (COPD) when a single type of medicine has proven to be ineffective.

Budesonide is a corticoid drug which is anti-inflammatory in action while Formoterol is a bronchodilator which works by relaxing the airways muscles thus facilitating breathing. This inhalation combination medicine is given under prescription for asthma prevention; treatment of Degenerating Chronic Obstructive Pulmonary Disease (COPD).

Formoterol belongs to a class of medication called long acting beta agonists. Formoterol helps in relaxing the muscles of the air passages, thus widening it and making it easier to breathe. Budesonide belongs to a group of medicines called as corticosteroids. It works by reducing swelling and inflammation in the nose, throat, lungs or intestine.

Foracort may cause unwanted side effects such as: a sore throat or tongue, which may be due to candida infection (thrush), hoarseness or throat irritation, nasopharyngitis, headache, tachycardia (rapid heartbeat), tremor (shaky or tense feeling), palpitations.