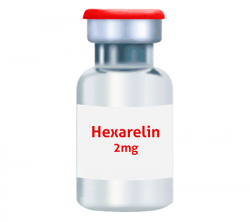 Hexarelin stimulates GH secretion. Hexarelin is more resistant to proteolytic degradation than GHRP-6. Hexarelin has 7 amino acids H-His-D-2-Methyl-Trp-Ala-Trp-D-Phe-Lys-NH2 and having a molecular weight of 887 Dalton. The Molecular Formula is C47H58N12O6.

Growth Hormone Releasing Peptides (GHRP-2, GHRP-6 and Hexarelin) are a small family of peptides acting at the pituitary and the hypothalamus to release Growth hormone (GH). These peptides were discovered 20 years ago and in clinical researches proved to be able to stimulate pituitary to produce endogenous Growth hormone. GHRP-2, GHRP-6 and Hexarelin are replaceable drugs and have similar mechanism of action.