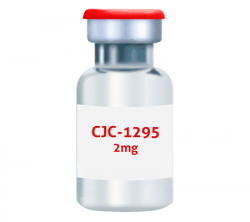 These four amino acids allow the peptide to bind permanently to the protein albumin inside the body, which reduces degradation and oxidation of the peptide to increase its stability. Furthermore, these additional amino acids increase the binding affinity to the GHRH receptor to increase potency. GHRH is necessary for natural growth hormone secretion and is also needed to achieve optimal natural growth during development.

Many researchers have documented the growth-promoting effects and safety of GHRH administered to children with growth hormone deficiency. Multiple treatment regimes, including intravenous pulses, intranasal delivery, subcutaneous injections, and continuous infusion have been tested to show that the growth-promoting effect of GHRH is connected with the dose amount and frequency. No unexpected adverse reactions have been seen after prolonged treatment, regardless of the mode of administration. However, some minor side effects may occur, including tiredness, euphoria (head rush), water retention, tingling and numbness. Following the recommended dosage will minimise the risk of side effects.